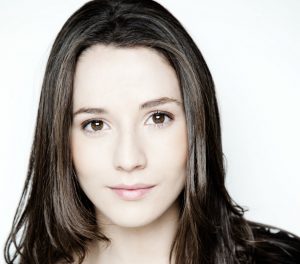 Originally from Wexford, and a graduate of the Gaiety School of Acting, Charlie most recently appeared in the role of Anne Brontë in Sally Wainwright’s To Walk Invisible (BBC Film), based on the lives of the Brontë sisters. She will soon appear in the feature film The Foreigner with Pierce Brosnan and Jackie Chan, due for general release in 2017. Other recent feature films include multi award-winning projects like ’71, directed by Yann Demange for Warp Films, Philomena, directed by Stephen Frears for Baby Cow/Weinstein Company and Northmen – A Viking Saga directed by Claudio Fah for Elite Filmproduktion.

Television includes series regular Ann in seasons 1 & 2 of the BAFTA award-winning Happy Valley for BBC, the leading role of Elizabeth in Rebellion for RTE/Touchpaper/Sundance TV, the recurring role of Martha in two seasons of The Village (IFTA Best Supporting Actress nomination), with guest leads in Quirke, Ripper Street and The Last Kingdom, all for the BBC. She appeared as Siobhan in all five series of RTE/Octagon’s multi award-winning TV drama Love/Hate for which she twice won Best Actress at The Irish Film and Television Awards (2013 and 2015). Other television work includes Single Handed (Touchpaper TV/RTE) and Misfits (E4/Clerkenwell Films).

Stage work includes, for the Abbey Theatre, Eliza Doolittle in Pygmalion (Best Actress, Irish Times Theatre Awards) and the world premiere of Mark O’Rowe’s Our Few and Evil Days. Other theatre includes Enda Walsh’s Disco Pigs at the Young Vic; Druid Theatre’s Big Maggie and, also for Druid, The Silver Tassie at the Lincoln Center New York. Other productions include Romeo and Juliet, The Sound of Music, Cabaret, The Taming of the Shrew, 4.48 Psychosis, Once a Catholic, This is Our Youth, Anatomy of a Seagull, The Resistible Rise of Arturo Ui and The Colleen Bawn