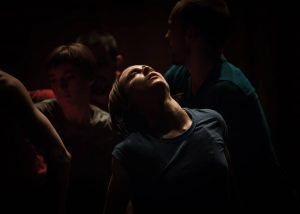 Oona’s choreography Hope Hunt  The Ascension into Lazarus was nominated for Best Production and won Best Performer for Oona at the Tiger Dublin Fringe 2016. It has been selected as an Airpwaves Twenty17 work with a European tour.

Oona’s new work for 2017 is Hard to be Soft – A Belfast Prayer in a collaboration with David Holmes and the people of Belfast. It will be produced by Prime Cut Productions and will premiere in October 2017 at the Belfast International Arts Festival.