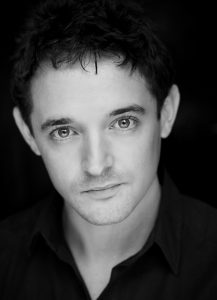 Film work includes Lamb; the young Christy Brown in the Oscar-winning My Left Foot; The Three Musketeers; The Young Poisoner’s Handbook; Chocolat; The Stag and the upcoming Handsome Devil, Pilgrimage and as Samuel Taylor Coleridge in Mary Shelley.

TV work includes the IFTA-winning Your Bad Self; Ripper Street; Moone Boy; The Fall and the new series of RTE’s Rebellion.

As a videographer, he has worked on 16 Possible Glimpses and Hedda Gabler at the Abbey Theatre. He has directed music videos with artists including Sinéad O’Connor, The Coronas and Little Green Cars, and has written and directed award-winning short films with the Irish Film Board. As a photographer he has exhibited at the RHA, Dublin and the RUA in Belfast and was shortlisted for the inaugural Hennessy Portrait Prize at the National Gallery of Ireland in 2014.