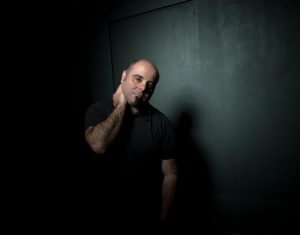 Teho Teardo is a musician, composer and sound designer with an interest in developing connections between electronic and acoustic sounds. Teho began playing clarinet at the age of 8 but a few years later, with the advent of punk, he began another, more interesting, age as a guitar player. From then on Teho collaborated with artists such as Blixa Bargeld (Einstürzende Neubauten), Girls Against Boys, Lydia Lunch, Cop Shoot Cop, Alexander Balanescu, Wire, Mick Harris, Mario Brunello, Jim Thirlwell, Erik Friedlander and many others.

Teho is also one of the most active composers for cinema in Italy, where he has created many soundtracks for renowned directors such as Paolo Sorrentino, Daniele Vicari, Andrea Molaioli and Gabriele Salvatores. His soundtracks have won him many major awards and great critical acclaim. The compilation album Music includes incidental film music from the international hit and Cannes jury prize winner Il Divo by Paolo Sorrentino, for which he also won the David di Donatello Prize, Italy’s most prestigious prize, as well as the Ennio Morricone Prize at the Italian Film Festival. Presenting the prize, Morricone said of Teho’s music: ‘Experience tells me that sooner or later those who seek will find and in the passages between searching and finding there are important moments, moments such as the ones we hear on this beautiful album’.

Teho created the music for Voyage au Bout de la Nuit, the very succesful theatre piece inspired by Céline’s masterpiece, with the celebrated actor Elio Germano. Other theatre work includes Ingiuria, a collaboration with the Balanescu Quartet, Blixa Bargeld and Socìetas Raffaello Sanzio. With cellist Mario Brunello, Teho reworked J.S. Bach’s Art of Fugue, combining the sound of a string quartet with electronics. He recently released an album with Blixa Bargeld titled Still Smiling, and the duo are currently playing a series of concerts throughout Europe.

Teho created the music for the new play by Enda Walsh, Ballyturk, this work has been released both on cd and vinyl.